1 During the period, the mobile Internet segment has been classified as discontinued operations as a result of the disposal of the entire equity interest of 91 Wireless Websoft Limited and its subsidiaries.
2 See “Non-GAAP Financial Measures” section for more details on the reasons for presenting these measures

Mr. Liu Dejian, Chairman and Executive Director of NetDragon, commented, “In the third quarter of 2013, NetDragon maintained growth momentum in total revenues, which increased to RMB 480.9 million, representing 12.8% quarter-over-quarter and 65.7% year on year. The management is confident in the growth prospect of the Company as we enter our next stage of development following the sale of 91 Wireless.

“During the quarter, our core online game business continued to generate stable revenue and strong profitability for the Company. Several of our games including “Conquer Online” and “Way of Five” launched new expansion packs during the quarter. In respect of Web Game, “Caliber of Spirit”, a 3D MOBA webgame based on NetDragon’s in-house developed S3 game engine, conducted the official open beta testing in July. The latest expansion pack “Gods Recovery1” of “Eudemons Online” is currently in official open beta testing. The timely development and release of expansion packs of our core games continues to represent our efforts to increase the interest of our existing players and stimulate new players to play our games.

“As for the mobile Internet business, we will shift our strategic focus to research & development and operation of original mobile games, a field where we have gained core competitiveness from our long history of game development expertise. In addition to the mobile games that were previously launched, we have successively launched a series of high quality mobile games, including “Age of Egmont”, “War of Gods”, “Crazy Horde” and “The Celestial Saga”, further enriching our mobile game portfolio. We believe that, by leveraging our experiences accumulated in research & development and operation of games, as well as our open minding seeking win-win cooperation with operators, our mobile Internet business will move into a new stage of growth and become an increasing revenue contributor to NetDragon.

“During the period under review, the disposal of our subsidiary, 91 Wireless, to Baidu has become a major milestone in the history of the Internet and mobile industry and in the wake of completion of this disposal; we believe NetDragon will enter another exciting phase of development. After the payout of the special dividend of HK$7.77 per share to reward the shareholders for their long-term support, the remaining proceeds from disposal of 91 Wireless will provide strong financial support to NetDragon to continue to incubate our game business and new strategic emerging businesses, as well as lay solid foundation for us to develop new Blue Ocean projects. We have noted that, with the rapid social and economic development in China as well as the popularization of mobile Internet and other information technology, China‟ market for online education is expanding rapidly. After over two years of development, we have completed the initial stage of business model exploration and resources accumulation in online education and going forward, the Company will focus on ramping up our business volume in this space. Recently, we have announced the establishment of a joint venture  company with Hon Hai and Vision Knight Capital to specialize in the research & development and promotion of related products.”

Business Highlights for the Third Quarter of 2013

Since October, Mr. Ben Yam joined NetDragon as Chief Financial Officer to be responsible for financial management, corporate finance and investor relations. Mr. Yam has over 15 years of professional experience in financial services spanning private equity, corporate finance and auditing, and has served as an active board member of several venture-capital backed portfolio companies. He holds a Bachelor of Commerce Degree from the University of British Columbia with majoring in accounting. He is also a Chartered Accountant, a member of the Hong Kong Institute of Certified Public Accountants and CFA charter holder. 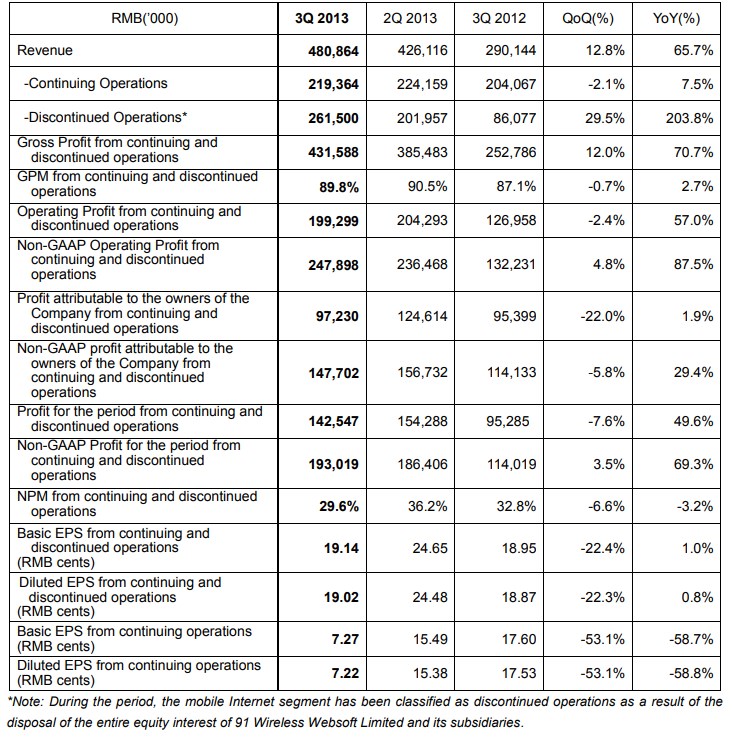 A live and archived webcast of the conference call will be available on the Investor Relations section of NetDragon’s website at http://www.netdragon.com/investor/ir-webcasts.shtml . Participants in the live webcast should visit the aforementioned website 10 minutes prior to the call, then click on the icon for “2016 Interim Results Conference Call” and follow the registration instructions.

About NetDragon
NetDragon Websoft Inc. (777.HK) is a leading innovator and creative force in China’s online gaming and mobile Internet industries. Established in 1999, we are a vertically integrated developer & operator of MMORPGs and a cutting-edge R&D powerhouse. Established in 1999, NetDragon has always been devoted to research and development and committed to promoting the development of online gaming industry. We launched our first self-developed online game Monster & Me in 2002, followed by multiple titles including Eudemons Online, Conquer Online and Zero Online. We are also China’s pioneer in overseas expansion, directly operating titles in overseas markets since 2003 in English, Spanish, Arabic and other languages. NetDragon has a proven track record in incubating online gaming and mobile Internet projects over the years, including the No. 1 Chinese online game portal – 17173.com, and various well-known mobile Internet platforms, such as 91 Assistant and HiMarket, the largest third party application distribution platform.